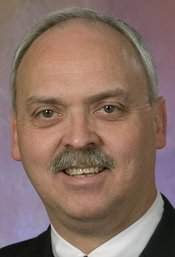 BDS DIRECTOR HEATHERLY ANNOUNCES RETIREMENT
City of Springfield Building Development Services Director Nick Heatherly has announced his intention to retire effective Jan. 29, 2010.
Heatherly has worked for the City for more than 23 years in the Building Development Services and Public Works departments. He was named Director of Building Development Services in 2000. Prior to that, he served as Assistant Director of Public Works, Superintendent of General Services, and Technical Assistant to the Director of Public Works.
While working in Public Works, Heatherly oversaw the extensive renovation to convert the former Jewell Station Post Office into what is now the Busch Municipal Building, the central offices for Springfield’s city government. He also coordinated the public streets, sewer and stormwater infrastructure for the Partnership Industrial Center East project.
During his tenure as BDS director, the City implemented stronger ordinances applying to dangerous and boarded-up buildings, particularly in residential neighborhoods. The goal of the program is to enforce improvements of the buildings or the City may acquire them to put the houses or lots back into productive use and preserve neighborhoods.
A Navy veteran, Heatherly returned to the Ozarks after receiving his honorable discharge and attended the University of Missouri-Rolla where he received his degree in civil engineering. He is a graduate of Glendale High School.
City Manager Greg Burris said an interim appointment will be named before Heatherly retires.
“We are very proud of Nick and his legacy will be the outstanding job he did during his time in Public Works in restoring new life into this venerable 1930s building that will serve the City of Springfield for many, many years to come,” Burris said. “As BDS director, Nick has been steadfast in his commitment to the life-safety principles that guide the City’s primary role in both new development and renovation.”
The Building Development Services Department works to assure the health, safety and welfare of the community by implementing and monitoring city, state and federal building codes. It also licenses four trades: electrical, plumbing, gas and mechanical. BDS works with businesses, homeowners, landlords, tenants, contractors and developers.
Posted in Awards & Accolades, HBA Home Pros News, News, Newsroom
Scroll To Top Skip to content