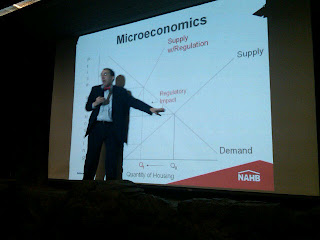 As part of their year-end coverage and wrapups, both the Springfield Business Journal and the Nixa Xpress highlighted how housing and increasing new home construction will be necessary drivers for any local economic recovery in 2011:

The Home Builders Assocation of Greater Springfield wants to know just what kind of impact the housing industry has on the local economy. And they’ve brought in a Syracuse University economist to do it.

Dr. Elliot Eisenberg of the National Association of Home Builders visited a home under construction in Nixa’s Richmond subdivision Nov. 30, as part of the HBA’s preview tour of a local economic impact of housing study to be released this summer.

“We don’t appreciate how important housing is to the local economy,” Eisenberg said. “We need it for the health of the overall economy.”

Area housing starts have bounced back in 2010 from their 2009 plummet.

Home Builders Association of Greater Springfield CEO Matt Morrow said housing starts in the six-county area are on pace to rise nearly 20 percent, pointing to 1,102 permits filed through the end of November, up from 1,033 at year-end in 2009.

“We started a gradual recovery in 2010, although to most people it may not feel like that yet,” Morrow said. “By any measure, the bottom was in 2009.”