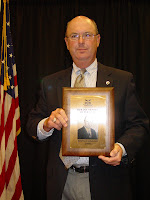 Kevin Clingan, Kevin Clingan Home Design and Construction, is the 2008 Builder Member of the Year.

“It’s an honor to receive this award from your peers and Kevin has the exclusive distinction of being selected for this award twice,” said Matt Morrow, HBA Executive Officer. “Kevin’s leadership has anchored a shifting local residential construction industry. He’s helped this organization focus resources in a way that will ultimately strengthen our industry and individual member companies for the long term. In addition to fulfilling his duties as our Association President, Kevin chairs several committees and participates in nearly every HBA event from Legislative Day to the Fishing Tournaments.”

Other awards announced at the HBA’s Annual Awards Banquet on Tuesday evening:

Associate Individual Member of the Year: Tim Havens, Cottage Castle Homes
Havens is an active member of the Association and serves on the Membership Committee. He’s been instrumental in advancing strategic recruitment goals by actively educating industry professionals in surrounding counties about the benefits of HBA membership.

Associate Company of the Year: Conco Companies
Conco sponsored and participated in many HBA activities and events in 2008. The company made significant contributions to the St. Jude Dream Home project this year and served as a presenting sponsor for the Coalition for Building a Better Tomorrow’s Sporting Clays Tournament. Conco is also an active member of the newly established Green Building Associates Committee.

Hall of Fame Inductees: Lon Goff and Terry Meek
For 2008, the HBA Past Presidents have selected two individuals for induction into the HBA Hall of Fame – one builder and one associate.
Home Builder Lon Goff
-Served as President of the HBA 1994
-Over the years has served on numerous HBA committees
-Participated in Parade of Homes and Spring Showcase
-Was years ahead of the ‘green building’ curve; initiating Greene County’s first conservation reserve program development ten years ago.
Terry Meek, with Meek’s – The Builder’s Choice
-Terry Meek’s service in the construction industry is well known.
-His leadership and philanthropy in the community have made the area a better place to live.
-Over the years, Terry and his employees have served on virtually every HBA committee
-Provides industry education and support for builders and remodelors, both through the HBA and independently.
-Most of all, Terry understands the issues that most affect his customers: home builders and remodelers throughout the region.
-He was instrumental in helping establish the Coalition for Building a Better Tomorrow to help protect builders on many of these issues that affect their businesses, and he has never wavered in his support for the CBBT, year after year.

HBA Ambassador of the Year: Rusty MacLachlan, J. Russell MacLachlan Homes
(HBA members submitted nominations. Member Awards Committee selected the winner).
-An “ambassador” is someone who represents the HBA exceptionally well in outside circles. Whether it be in other organizations, the broader building industry, or publicly, an HBA ambassador is someone who goes above and beyond expectations to share the good news of what the HBA is doing for its members, the industry, and consumers.
-Active member of the HBA Board of Directors at the state and local levels.
-He serves as an effective spokesperson for the industry, in public appearances and in the media.
-He educates potential home buyers on the construction process by serving as the builder expert on KOLR’s “Building the Ozarks” program.
-He is just now completing his second term as president of HBA of Missouri, and has been nominated to take office in January as President of the HBA of Greater Springfield.

Supplier of the Year: Springfield Granite-Plus
This award recognizes an HBA member company for outstanding service to builder members and the home building industry in supplying products and materials essential to home building.

Salesperson of the Year: Jon Feldt, JAG Architectural Products
This award recognizes outstanding performance in sales on behalf of an HBA member company.